Last week, some people from my school told me that the Buena Vista Social Club was playing in Buenos Aires. This is a group from Cuba that plays very traditional cuban music. It’s an old group and the whole band doesn’t travel around anymore. Usually one of the original members travels with a back up group. Anyway, Jesse and I have been listening to them for a little while and we were really excited to have the chance to see them.

This is one of their most well known songs:

Some classmates and I buying tickets to the show… trying to explain, in spanish, we want the cheapest seats, preferably 7 together…

The show was at the Teatro Colliseo, one of the larger theaters in the city. Funniest thing though… the guy selling us tickets offered 7 together for 200 pesos each instead of the cheapest seats for 120 each. So we split the group up and got the cheaper tickets for two different sections. When we got to the theater, we split up and some of us went up to the top to where we thought our seats were. We were then sent down to the second level, then down to the bottom, then back up to the second level. All the while, each usher is looking at our tickets as if the seat numbers meant something. Finally, we were escorted into the mezzanine level and told to sit in the back row because the usher “didn’t know how much it would fill up”. Turns out the seat number meant nothing and a large group of our friends were sent to the orchestra level before it filled up, which probably cost about 350 pesos per ticket. We eventually made our way to the first row of the mezzanine and watched the show from there… Good thing we didn’t go for the 200 peso tickets. 🙂 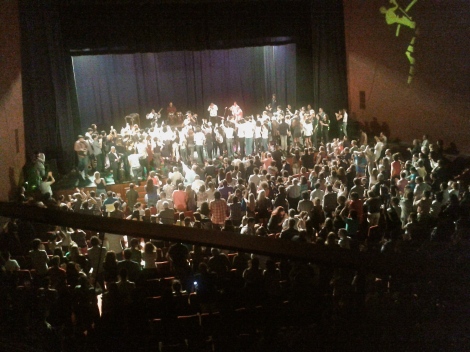 Last song of the night, Eliades invited everyone to dance “if you can”. This led to people just walking up on stage to dance. The poor stage hand kept running back and forth to the stairs on either side of the stage trying to stop people from coming up. Eventually he gave up.

We all agreed it should have been in a dark smoky club where we could have danced the whole time, like back in the day… but the concert was awesome!!

What we're up to